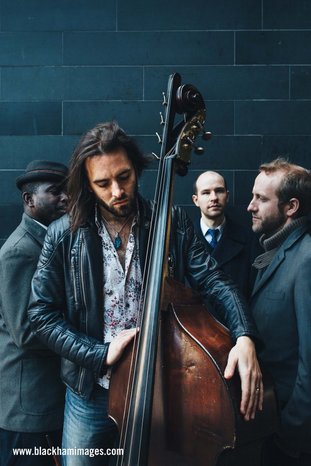 Photograph courtesy of Rob Blackham
There were at least two hundred patrons crammed into the performance area adjacent to The Clore Ballroom to see one of Britain's very finest contemporary quartets as part of the "Friday Tonic" series on the first night of the EFG London Jazz Festival.
​
This band is highly creative and exciting, working in a genre somewhere between free form and advanced lyricism and containing four talented musicians who have developed an almost telepathic musical understanding. Matt Ridley the leader and bassist is a graduate of The Trinity College Of Music and has established a solid place in the UK scene. He is the heartbeat of The Darius Brubeck Quartet as well as leading his own groups with whom he is also the principal composer. The multiple poll winner, alto and soprano saxophonist  Jason Yarde is one of the most formidable and free thinking reed  men in jazz, both radical and progressive in outlook . On piano John Turville centers the band's performance with a relaxed and melodic approach, which adds to the feeling of balanced completeness of each number. He is also as much at home in the classical world as well as directing the East Seventeen Big Band. Completing the quartet is George Hart, one of the most talented drummers of the new generation and already has experience with the likes of Ivo Neame and John Parricelli all the way to the pop oriented Swing Out Sister. His  subtle shading and thunderous mallet work fits perfectly with the overall ethos of the music.

The two forty five minute sets comprised music from the band's current album Thymos (Whirlwind Recordings WR4643) and work for a forthcoming as yet unnamed release due in February next year.  Things kicked off in trio format with "Theme And Variations", a delicate and classically influenced piece with fine piano/bass conversations underpinned with delicate cymbal work from the drum chair.  The unscheduled appearance of a young dancer (Cosimo) in front of the stage  was a well received enhancement to proceedings. "Music To Drive Home To", after a solo piano opening, was a feature for the soprano saxophone of Jason Yarde, who unlike most of his contemporaries  on the instrument, needs no audible Coltrane influences  to further his complete mastery of the instrument. A twenty seven minute mini suite with the highly middle eastern influenced "Siddhartha" seguing  into the ballad like "River" brought the first set to a close, with superb hand drumming, bowed bass lines, hypnotic soprano and delicate piano  all to the fore.

A free form unaccompanied soprano solo opened set two on another extended composition "Sari Gelin", a tune with Azerbaijani routes with an arrangement from the leader. As the rhythm section joined in the tempo began to change with a quiet reflective piano interlude eventually emerging before things took off once again, the kaleidoscope of sounds reminding us briefly of  nineteen seventies avant-garde, before sanity returned as the piano closed things out. "Mental Cases" from the forthcoming new release was based on a poem by Wilfred Owen was a tour de force for all and took us to more uncharted territories with the drums out front. Subtle piano, bowed bass, delicate cymbal work and shifting harmonies were in the ascendance as "Ebb And Flow" brought the performance to a close.

The sheer quality of this challenging music had kept the packed audience in their seats throughout, and was reflected in the speed that the bands albums were completely sold out within minutes of the close.