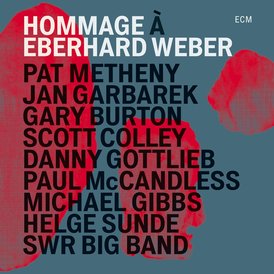 Not an Eberhard Weber album per se, but as the album title suggests a hommage to the great German bassist in celebration of his seventy fifth birthday in January this year. However, Weber's playing is featured heavily within the fabric of the music thanks to tape recordings and modern technology.

The concerts given at Stuttgart's Theaterhaus commissioned arrangements of Weber's compositions to be played by the SWR Big Band and featuring musicians that have played an important part in the the bassist's musical journey over the years. Appropriately the set opens with Eberhard's longtime boss, Jan Garbarek in an association that goes back many years as the bass player in Garbarek's various groups for a quarter of a century. 'Résumé Variations' continues the work began on the 2012 album Résumé where the bass solos from live performances of the Garbarek Group were isolated and developed into new compositions with the addition of keyboard parts or as in this case Jan's soaring soprano improvisations.

Music from Weber's considerable discography as leader is plundered in new arrangements of well known pieces, with Mike Gibbs wonderful orchestration of 'Maririzius' from the album Later That Evening (1982) with solo contributions from Oregon's Paul McCandless and Gary Burton, and the beautifull 'Notes After An Evening' from 1993's solo-recording Pendulum that again features Burton and McCandless and a superb alto solo from Klaus Graf.

However, for this this listener, the biggest surprise comes in the form of the long title track, 'Hommage' an original piece by Pat Metheny clocking in at just over the thirty minute mark. The guitarist admits, with no little modesty, that the last time he wrote an arrangement for big band was when he was in high school and rises to the challenge with an exceptional piece of writing. Taking Weber's idea of working with his own recorded bass solos to create new music, Metheny takes this a step further incorporating video recordings of the bassist that could be shown during the concert and seamlessly weaving the improvised solos performed on the visual media (albeit it with some skillful editing) into the real time performance of the big band.

Throughout this long performance Metheny maintains the attention with a blend of fine writing and arrangements that keep the momentum moving forward. Paradoxically the writing is at once typical and untypical of the composer with many devices familiar from the guitarist's own work jostling with the new charts written for the big band. The composer has also been at pains not to over write and leaves plenty of space for soloists Gary Burton, Scott Colley, Danny Gottlieb and Weber's contributions from the tape and his own magnificent solo should definitely not be overlooked.
​
With all the above components crammed into a concert, Eberhard must have felt honoured to have had his work acknowledged in this way, and it is indeed testament to the importance of his work and contribution as composer and bass player that it was possible to gather such a veritable talent of musicians and arrangers willing to put so much into this event, and the resulting album is another fine release to add to the Weber discography.
Reviewed by Nick Lea